EuroVelo 8 project concludes with a bright future for Mediterranean cycling 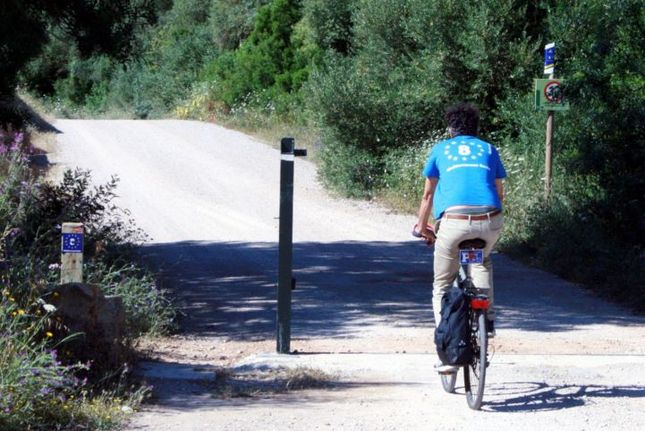 Following four busy years of collaboration on EuroVelo 8 – Mediterranean Route, involving 10 partners from 7 different countries, the MEDCYCLETOUR project came to an end this year. The project, funded by the Interreg Mediterranean Programme, led to many concrete outputs and helped to launch a new Long-Term Management Agreement (LTMA), which will ensure good coordination on a transnational level to keep improving the route.

The types of actions achieved in the frame of the project along EuroVelo 8 – Mediterranean Route encompass various topics, including some very concrete pilot actions:

The first pilots implemented along the route were promoted in the middle of the project – you can find further information on this topic by reading the articles available here. Successful pilots were also implemented more recently, and we would like to highlight some of them. Namely, the new signage and counters that were installed along Andalusian sections of the route; the cycling friendly services developed in Koper, Slovenia; and the work done by the Italian Friuli Venezia Giulia region on usage monitoring.

In Andalusia, a total of 4 sections have been signposted: two sections in the province of Cádiz (sections 4 and 5 between Facinas and Guadiaro) and two others in Almería (sections 13 and 14 between Almeria capital and Carboneras). The signposted route in Andalusia is very attractive, passing through small fishing villages, diverse landscapes and natural parks with Phoenician, Roman and Andalusian ruins, such as Los Alcornocales and Cabo de Gata-Níjar. The route also hosts magnificent flora, including wild cork oaks, holm oaks, oleanders, sunflowers and semi-deserts, while the landscapes of the wild beaches of Cabo de Gata exhibitthe beauties of the Mediterranean Sea. The new signposts make the route more accessible, safe and fun to follow.

To understand how EuroVelo 8 is used in Andalusia, four bicycle counters have been placed, two on a section signposted in Cadiz, and two on another section signposted in Almería. The counters are placed on representative locations of the sections. The counters help to understand how many and what type of people use the route. Unfortunately, the planned survey to further strengthen the gained knowledge could not be carried out due to the COVID-19 pandemic. The collection, analysis and periodic notification of the data collected by the counters will soon be public and will be managed by the Spanish NECC Conbici.

The objective of this activity was to establish a network of cycle friendly services along the Slovenian section of EuroVelo 8. These services include safe bike storage for accommodation facilities, bicycle parking at restaurants and bars, repair services and discounts for cycling tourist at local shops. More than 250 potential network members were identified. In a next step, the criteria and the brand will be defined in a workshop together with the potential stakeholders. The ultimate goal of this inclusive approach is to create the network of 40 cycle friendly services that includes at least one member from each service category. As the Slovenian part of EuroVelo 8 is adequate for beginners and occasional cyclist, the main target groups are all cycle tourists, mainly from Italy, Austria and Germany.

Similar to the usage monitoring in Andalusia, this pilot monitoring activity in Friuli Venezia Giulia in Italy consists of two parts: permanent counters and surveys. Four bicycle counters were installed in January 2020. Interviews were also planned at the counters’ locations. Each interview included questions about the cyclists and their trips along the EV8 route in Friuli Venezia Giulia. However, Covid-19 pandemic forced a change in the survey plan, as interviews were replaced with an online questionnaire. The objective of this activity was to gain first-hand insights into the current user statistics on stretches of the route to prove the potential of the entire route.

In addition to these pilot activities, the MEDCYCLETOUR project also allowed the partnership to work on a very informative impact assessment report. Its preliminary results suggest that the MEDCYCLETOUR project is on track to meet the impact and results predicted at the beginning of the project. For the regions where data series over several years were available, a clear increase in usage can be observed. This is an encouraging sign that cycle tourism is increasing along the route, and that the developments in infrastructure, signage, touristic services and adequate promotion are bearing fruit. Another trend that is clearly visible in all areas where surveys were taken is the predominance of male respondents. However, since participation of male cyclists dominated the surveys, efforts to attract female cycle tourists in the future should be intensified to realise the full potential of cycle tourism along the EuroVelo 8 route.

Other project activities included the collection of 15 good practices on cycling tourism route infrastructure. You can read all about the good practices collected by our partners in this article. MEDCYCLETOUR partners have also signed a Charter for Sustainable and Responsible Tourism in the MED Area, which was presented here.

All the project’s news and events, as well as some of the project’s deliverable, can be consulted on the MEDCYCLETOUR project website. With the ongoing preparation of a Long-Term Management Agreement which aims to keep working on EuroVelo 8 – Mediterranean Route at the transnational level, we hope to guarantee good cooperation between all Mediterranean countries on the development of cycling tourism in the region and on making EuroVelo 8 even more enjoyable and safe to ride for all kinds of bike travellers!