Fostering Sustainable Tourism in the Mediterranean Region: Results of the International Debate in Brussels 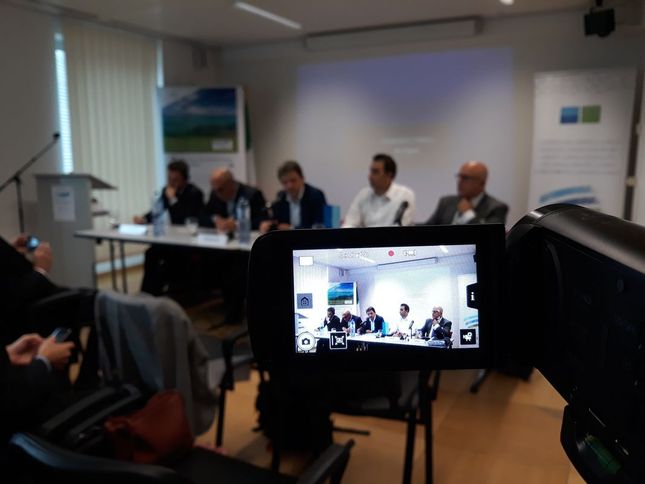 Triggering the discussion on the importance of a sustainable approach in European tourism, with a special focus on the Mediterranean area and the next programming period.

(Rome, 14 November 2019) “Claiming for a European agenda that includes a vision, not only about tourism but about a broader “visitor economy”: a vision of other actors and areas including common visions such as smart destinations and balancing social-cultural-environmental considerations” is of the utmost importance, said Mr. Tomaso Comazzi from NECSTouR, new partner of the Sustainable Tourism Community, on the occasion of the international debate “Fostering sustainable tourism in the Mediterranean region” that took place on October 9th, 2019 in Brussels.

This debate, organised as a side event of the European Week of Cities and Regions 2019, had the objective of triggering the discussion on the importance of a sustainable approach in European tourism, with a special focus on the Mediterranean area and the next programming period. This has been the occasion for the MED Sustainable Tourism Community to showcase the achievements of its territorial cooperation projects in fostering sustainable tourism in the Mediterranean area, and to present relevant documents, such as the policy paper and policy factsheets.

After a welcoming session introduced by Mrs. Francesca D’Angelo, policy officer at the Tuscany Region in Brussels, the hosting institution of the event, and by Mr. Pere Granados Carrillo, President of Arco Latino and Mr. Francesco Cocco, Secretary General of Adriatic Ionian Region, Mr. Roberto Grassi, BleuTourMed_C3 Project Coordinator, Arco Latino, and Mrs. Elen Lemaitre-Curri, Director of Plan Bleu showed the Community achievements after the first three year project cycle. Then the floor was left for the two panels of the day.

The first panel of the event was focused on better understanding how to cover the existing gap between the actors at local level and the policy makers at higher levels when it comes to innovative sustainability solutions in the tourism sector. It has been highlighted that inter alia bureaucracy and the lack of dialogue were important barriers preventing the bridging of this gap. The panel featured the contribution of Lydwine Lafontaine, Med Programme Joint Secretariat, Tomaso Comazzi, Communication Officer, NECSTouR Permanent Secretariat, Natalija Havidić, Ministry of Tourism of the Republic of Croatia Representative of SMARTMED strategic project, funded by PANORAMED Project, Carla Danelutti, Project manager, IUCN-MED/MEET Network. It was moderated by Josep Rodriguez, Responsible for International Relations, Tourism Department, Barcelona Provincial Council (BleuTourMed_C3 partner).

The reflections began by highlighting the focus of the next phase of the project on creating a favourable environment for capitalisation and influencing tourism policies and cohesion policies. It was also an occasion to draw a first assessment of the first three years of the project. One of the positive conclusion was made by Lydwine Lafontaine, who viewed with positivity the fact that “projects no longer work in isolation as they used to work”. She insisted on the fact that this has been made possible thanks to the consolidation and animation of thematic communities, which, through exchanges orchestrated by horizontal projects - such as BleuTourMed_C3 for the Sustainable Tourism Community - have created bridges between partners and promoted the dissemination of results for replicability. There has been a cross-fertilization of objectives, which provided for a very fertile ground for reflection, conducive to the enhancement of results, transfer, capitalisation and even mainstreaming, many aspects on which the next generation of horizontal projects will be focused.

The hopes and objectives for this second generation were also discussed. Among some could be mentioned the promotion of transfer and strengthening of capitalisation of the jointly elaborated tools and results that explicitly target collective territorial appropriation and ownership, the engagement with relevant policy makers advocating for effective political leverage, and the connection with other Interreg MED thematic communities as well as with PANORAMED to improve governance and mainstreaming modalities.

The second panel was focused on better understanding the actions and plans of EU institutions and key players in relation to the promotion of sustainability in the tourism sector. It featured the contribution of Andrea Cozzolino, Member of the European Parliament, Chair of Delegation for relations with the Maghreb countries and rapporteur regarding the new Cohesion Policy, Milosz Momot, European Commission, DG GROW, Deputy Head of Unit Tourism, Emerging and Creative Industries, Aldrin Dalipi, President of the Regional Government of Tirana and Vice-President of Adriatic Ionian Euroregion, Gaetano Armao, Vice-President and Regional Minister for Economy of Sicily Region and Member of the Committee of the Regions. It was moderated by Francesco Cocco, Secretary General, Adriatic Ionian Euroregion (BleuTourMed_C3 partner).

The reflections focused on explaining the importance sustainable tourism will have in the next programming period, and which political space tourism will have in the European agenda during the upcoming years. “Regarding sustainable tourism, the inclusion by the new Parliament of tourism matter in the agenda of the European institutions for upcoming years, is particularly relevant” said Andrea Cozzolino. He also highlighted that 30% of the new European Regional Development Fund 2021-2027 will be allocated specifically to the Green Economy, which will allow for both sustainable tourism and environmental sustainability to be more present in the political agenda of the Union. Besides, as Gaetano Armao noticed: “sustainable tourism is plainly part of the Sustainable Development Goals, and in order to implement them locally, it implies necessarily to rethink how policies are implemented”.

Europe is currently the world’s number one tourist destination with a global market share of 51%. The tourism industry generates 10.2% of total EU-28 Gross Domestic Product (WTTC, 2017). In the European context, Mediterranean countries are clearly leading the way in arrival numbers of international tourists. With a massive increase of tourist arrivals, tourism represents a major – if not the largest – source of exports, incomes, added-value and jobs in Southern and Eastern European countries. This assessment itself explains the raison-d’être of the Sustainable Tourism Community and its work towards developing innovative sustainability solutions in the Mediterranean tourism sector.