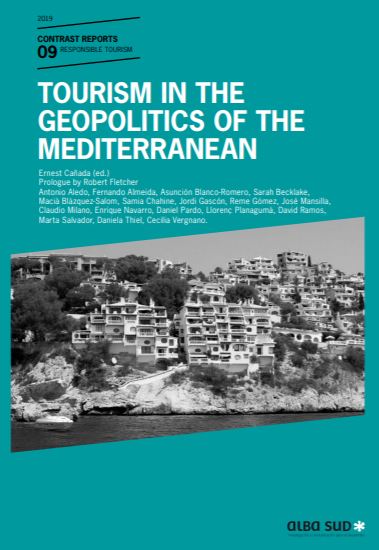 (Rome, 5 November 2019) “The Mediterranean has become a space in which North-South tensions intersect dramatically in a global world. Tourism appears as a key factor in this scenario, either as an expression of saturation and exclusion, or as an opportunity for development” wrote Ernest Cañada and Claudio Milano, in the ninth issue of the contrast reports sustainable tourism entitled “Tourism in the Geopolitics of the Mediterranean”.

This report provides some keys to rethink tourism in a changing Mediterranean, an approach necessary “within the framework of this new geopolitical situation, [where] the boundaries between locals and guests, migrants and tourists become more blurred, and a factor in new phenomena and social tensions.” It highlights the necessity for a new political agenda for the Mediterranean. This report changes the approach, drives away from the European perspective and shifts the perspective to a more North-South dynamic driven by the “Key S” model, taken into consideration economic and political processes revolving around the concept and impacts of tourism.

Several aspects of Mediterranean Tourism are raised, such as the link between development and tourism. For example, Macià Blàzquez-Salom focused on unequal geographical development and tourism. In his contribution, he states that “tourism globalisation demonstrates itself to be unequal and asymmetric, and dependent on the appropriation of resources and territories, income, connections, knowledge or power. (...) Multinational companies maintain their headquarters in the central locations of the world economy, while their productive processes – as in the provision of tourism services – are conducted in peripheral places; this polarisation feeds geopolitical tensions, even wars and other expressions of tension and violence. Rather than promoting development, tourism is founded on its unequal geographical distribution.”. Another stance is provided by Asunción Blanco-Romero, talking about a “tourism degrowth”. She writes that “the defence of tourism degrowth is not the destruction of tourism or anti-tourism. The point is to search for destourification formulas in which leisure activities are organized and practiced in different ways and scale, maximizing the benefits for local communities and the ecosystems.” To this aim, she mentions slow tourism, staycation or ecologic tourist structures. Besides, a case study is provided by Samia Chahine which analyzes in this report the case of Saïdia as an example of tourist development on the southern Mediterranean coast.

Other aspects are also developed, which could serve as food for thought for the Sustainable Tourism Community, such as the link between tourism and transports, security, sustainability and climate change. Building on the latter, Marta Salvador Almela highlights in her contribution the fact that “tourism is the economic activity with the maximum level of exposition on climate change effects. That makes it more vulnerable depending on the geographic area where it is developed”. She encourages to reflect on the viability of the current model and rethink current policies and strategies, while providing some solutions. Llorenç Planagumà also adds that “geological risks affect tourism because destinations oriented to these activities are usually located in regions with high susceptibility of geological dangers, and climate change will aggravate these risks”.

This report also features the contribution of Claudio Milano, Director of Master in Sustainable Tourism Destinations and Regional Planning at the Ostelea School of Tourism & Hospitality – University of Lleida, who moderated the session “Facing Overtourism: Challenges to Sustainability, Tourists’ Experiences and Local Communities” during the Mediterranean Sustainable Tourism Convention that took place last June in Barcelona.

The full report is available here.